It’s been a  busy month with lambing. It’s a very particular time of year when socialising or taking time out just isn’t possible. John and I both had flu but we couldn’t stop work and we didn’t want to ask anyone for help as we didn’t want them to catch what we had! We were like the walking dead for two weeks but we got through it and have lots of healthy bouncy lambs that seem to be doing well despite the weather and lack of grass! It’s hard to explain to someone that’s never worked a lambing season, why it’s so busy and intense so I will describe my day in detail. John is busier than me so I don’t want to give him anything extra to do but just so you know, this is just a fraction of what gets done in a day. No day is typical, there are lots of jobs that always need doing but you just never know quite what will happen. So today….

3am – check sheep in the lambing shed. There are 4 freshly born lambs and two mums. I can see that they each have a purple dot on their backs which means both ewes have been scanned for twins, so easy enough, two lambs each. I look at the lambs and see that two have shorter Cheviot-like ears and two have long Leicester-type ears. One mum is very skittish and isn’t taking responsibility for any of the lambs. The other one seems to like one of the Cheviot lambs so I pen her up with these two lambs. It’s tricky in the dark with only a torch and lots of restless sheep trampling around and causing confusion. The skittish mum hides in the crowd so I have to shine a torch on the ewes bums to see which one has blood on its rear. I find her and  cajole her into a pen with her lambs. She doesn’t want them and twice tries to escape. One of her lambs doesn’t seem to think much of her either and tries to escape too. I make sure they’re all secure, have water and silage to eat and go back to bed. I’m wide awake so I don’t fall asleep till around 5am.

6am – alarm goes off. I ask John to check the sheep that lambed in the night and I stay in bed an extra hour. I get up at 7am and make up milk from powder for our four pet lambs. We had two sets of triplets born the day before so I make up some extra milk for them too. John notices that with one set of triplets, they’re all trying to feed from the same side. He checks the ewe and he was right, one side of her udder isn’t producing any milk, so she definitely won’t have enough milk feed all three. We give a bit of milk to all the lambs from both sets of triplet, noting which ones are good at drinking from the bottle so if we need to remove any, it will be these ones. I check all the mothering up pens and make sure they are clean, dry and have silage and water. The ewes can drink about 10 litres of water a day and they won’t drink stale or dirty water so I’m constantly either changing or topping up water buckets. I let out the geese, ducks and hens, feed them all and collect the eggs. We then take Tagg, one of our sheepdogs, out to the field to round up 4 ewes who are due to lamb and bring them into the yard. That was the plan anyway but one decides to sneak under a hole on the fence, which basically fences off the river. John has to wade in, catch the ewe, push her up the banking to me and I have to gently pull her up and keep a hold of her. They can abort their lambs if they get stressed so we have to be really careful. John gets the quad bike and trailer to take her to the yard and put her in the shed with the others. We notice that one of the sheep in the shed is about to lamb. John thinks maybe he can take one of the triplets from the mum with only one teat and let the new mum have it. She was only scanned for a single so could manage another one. John put the smallest of the triplet lambs under the lambing sheep and helps the new lamb out. The reason for this is to get the ewe’s birthing fluid onto the foster lamb so it smells like hers. The new lamb is born and John wipes as much fluid as he can over the foster lamb. We leave them to it and go in the house for breakfast.

9am – John’s dad comes to help.  They go off to pick up some sheep as they need moving to new pasture. I stay in the house and package up soaps for a wholesale order. I clean the kitchen, do the dishes, hang up the washing and put another load of washing on. Back outside to see how John and his dad are. They’d noticed that there was a dead lamb in one of the fields. We need to move the ewes and lambs from that filed anyway so I go with John’s dad. We feed the sheep and lambs in the Long Meadow field and check they all look ok. No problems so we go to The Ridden. We are moving them to the top field in The Park so we only have to lead them through one gate. They all come through easily, happy for some food and there was very little grass left. We pick up the dead lamb. A badger must have had it because there is no head at all and it’s sides are ripped off so we can’t tell which lamb it is.

Back at the farm I go with John in the pick up and trailer to move the sheep that they picked up earlier. These are my Teeswater and Castlemilk Moorit lambs from the year before, plus Brian, my pet lamb from two years ago that I can’t part with! We drop them off in their new field and notice four fell sheep in the woods. We don’t have a dog with us so we will have to try and round them up another day.

1pm – A quick lunch of scrambled eggs. We have so many eggs so most days we have eggs in some form or another! A few household chores and checking emails etc.

2pm – Check all the sheep again. The triplet lamb that was given to the new mum has been drinking from her so that all seems fine. I bring the other five lambs some extra milk which they all seem happy about. I check water and silage. I make up milk for the four pet lambs and feed them. I notice two of them are beginning to develop orf (like a coldsore) so I treat that with a squirt of some antibiotic spray.

We keep the ewes and lambs in for a minimum of 24 hours to make sure all is well before letting them out of the shed and into the fields. We check the they are getting enough milk, the mum likes them and won’t abandon them when they go outside and that they are doing sticky, yellow poos. We have six ewes and lambs ready to go out today. We put bands on the lambs’ tails and bands to castrate any boys we don’t want to keep as tups (rams). The lambs don’t like it much and squirm a bit so we let them settle down and have a cup of tea. When we go back out all the lambs seem fine and so are ready to go outside with their mum.

We let one pen of the pregnant ewes out into the yard to feed them and bed them up with clean straw. I bed up all the empty individual pens with clean straw, ready for new mums and lambs. We do the same with the other big pen. We then bed up the cows and calves, the pen with the young bullocks (after they have been weaned so all around 10 months old) and the pen with the weaned heifers. John then puts some fresh silage in for both pens of sheep and for the bullocks as they were running low. While he puts the silage in the ring feeders with the tractor , I have to stand guard around the feeders incase the bale of silage drops on anyones head. It happened once to a calf and it was lucky to survive so we never take the risk now.

6pm – I take the dogs out for a walk in the woods. Back at home I put the oven on and peel potatoes for dinner. We have some left-over venison pie so that will go in the oven too and at the end a tray of kale. A simple dinner so while that’s cooking, I am writing this blog post. After dinner, I will check the sheep again and before I go to bed, feed the lambs and lock up the hens, ducks and geese for the night. I feed the dogs and cats. In bed I think of all the things I didn’t get done and hope I can get done tomorrow. I sleep for a few hours, then out at midnight and then again and 3am and it all starts again…… 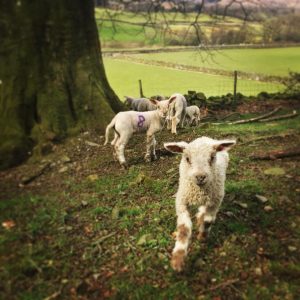