Goodness, it’s been a long time. I always promise myself to post more but by the time we finish up for the day, all I want to do is scroll through some social media or spend so long choosing a film to watch that before I know it, it’s bedtime. I’ve put a monthly reminder in the calendar now so hopefully you can catch glimpses of the farm over the coming year.

What’s Been Happening in January

January is kind of great. It’s a bit like hibernating after the rush of, basically, the whole year up until Christmas. It’s our time to slow down and recuperate and plan for the year ahead. There are still jobs to do every day but, for example, right now, it’s 6.30pm and pitch black outside so we’re inside and hunkering down. I don’t feel guilty in the slightest as I know soon enough we’ll be back to 16 -18 hour days when the lambs start appearing. We’re lambing earlier than normal this year. This wasn’t our plan but John bought me three Bluefaced Leicester ewes in early September. They had already been running with a teaser (a tup that’s had a vasectomy) which gets the girls ready for the real tup so as they were cycling when we got them, they went straight to one of our tups.

All the early lambers have been scanned to check whether or not they’re pregnant and how many they’re carrying. These are our Teeswaters, the Leicester and the Cheviot draft ewes. The draft ewes are older sheep that have been drafted down from the fell. These we cross with a Leicester tup. The Teeswaters and Leicesters we breed pure.

In a few weeks time all the fell sheep and the Castlemilk Moorits will be scanned. Also, any from the batch of early lambers who scanned ’empty’ will be scanned again, just incase they are pregnant but weren’t showing the pregnancy at the first scanning.

Scanning is important as any ewes carrying twins or triplets will need extra food and more closer attention in the lambing shed.

It’s my favourite time of year. It’s hard work, virtually impossible to leave the farm, there will always be some painful moments, but all that is outweighed by the joy! Below is one of my favourites from last year. Mildred, a Cheviot cross Herdwick. Our naught Cheviot ewe decided she prefers Herdwicks so escaped into someone else’s field and ended up with the sweetest lamb 🙂 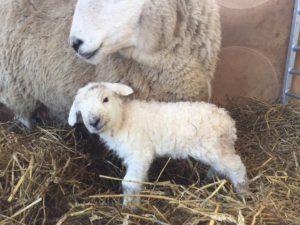